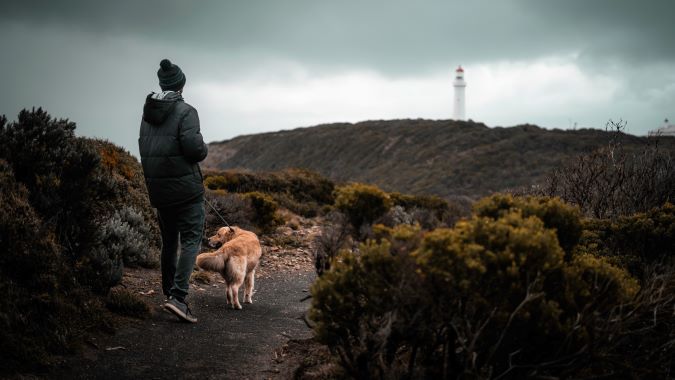 The winter my daughter Eliza was stillborn was long, cold, and snowy. We drove to the hospital on a crisp, cold night, expecting that everything would be fine. The next day, we left empty handed and broken hearted, and the world was blanketed in whiteness, glaringly bright.

Grief felt like an illness. I was achy and chilled. I could hardly imagine having the strength to leave my couch.

For the first couple of weeks, I barely moved. But eventually my husband returned to work and we had dogs who needed to be walked. And so on a freezing January morning a few weeks after losing my first child, I stuffed my feet into snow boots and ventured outside with two dog leashes in my gloved hands.

I felt shaky and vulnerable. I didn’t want to be outside moving. I wanted to be at home, snuggling my baby girl, waiting for the weather to warm up enough to bundle her into a carrier or stroller and take her out for a walk. My shoulders slouched and my feet barely shuffled along. The cold air felt like it was slicing into my lungs. I wore sunglasses both for the glare of light off the snow and to hide my teary eyes. Walking my dogs used to be an everyday occurrence and now it required monumental effort.

Somehow, I made it around the block. And somehow, that walk was a step toward carrying my grief and moving forward, rather than remaining stuck in my pain.

Forcing myself to move, to stretch weary muscles and push myself in a literal forward motion was a tiny step toward healing—a  step I took very reluctantly, but one that began a journey toward honoring my daughter’s memory by learning how to go on without her.

I should back up and say that I am not athletic. I’ve never played team sports, I don’t enjoy running. But I found that getting myself outside—at a park or in our neighborhood—helped me move through my grief and find a way to carry it without slumping under the weight of my sadness.

I dreaded the change of seasons because it meant the world was moving on without my girl. But the sunshine and warmer temperatures also got me outside more and, possibly because I had lost so much, I was suddenly more keenly aware of the beauty, fragility, and resilience of nature, even in my city neighborhood. I noticed what I had overlooked before—the beautiful and the mundane.

Nature is indifferent to our suffering. Flowers will go on blooming, the sun will go on shining. It is frustrating to see the world continue to spin when our own little world has completely shattered.

I wanted everything to stop. And yet, I also wanted time to speed up. I wanted to get to the point where I could function without dissolving into tears every few minutes. I found that if I was walking, I usually could keep from crying.

Summoning the energy to get myself out of doors was a struggle—and one I would have lost more frequently if it weren’t for the insistence of our dogs. But every time I got myself out there to take a walk, I found some measure of comfort. These were not walks for exercise—I followed the lead of my dogs who meandered and sniffed and stopped as much as they walked. But they forced fresh air into my lungs and sunshine onto my face as I trudged around the block.

The Japanese have a practice called “shinrin-yoku” or forest bathing. (Don’t worry—you don’t have to get naked.)

It is the practice of taking in nature through your senses, with the idea that being mindful in a forest—focusing on just the here and now rather than ruminating on the past or worrying about the future—can offer mental and physical health benefits. I was skeptical, but I discovered that my grief was bearable when I focused on what I was feeling in one singular moment rather than revisiting the nightmare of my loss or worrying about what I couldn’t control in the future. This was easier for me to do when I was outside and surrounded by nature (even when that nature included the street traffic and city bungalows of our neighborhood). I find even now that my breath naturally slows and deepens when I am among the trees, whether at a city park or a national forest.

Grief weighed so heavy on my chest that I felt as though I couldn’t take a deep breath for months. It was the summer after we lost Eliza when my grief felt for the first time light enough for me to really fill my lungs with air and take a true, deep breath that didn’t shudder with sobs. I don’t think it was an accident that I was in a forest. We had taken a trip to Vancouver and driven up to Whistler, Canada. We were going ziplining in the mountains, which was thrilling but heartbreaking because it was the sort of trip we wouldn’t have taken with a six month old baby.

I stood somewhere I never expected to be that summer—on a mountain in Canada—breathing in the cool air, gazing up at the enormous trees, peeking over the cliff’s edge at valleys so far down below it made me giddy.

The awe I felt in such a place is hard to describe. I felt both powerfully alive and very small, surrounded by the magnitude of nature. In that thin mountain air, I felt like I could take a deep breath again. Nature was indifferent to my suffering, but somehow this was freeing. For a moment, I could just be without feeling defined by my grief. Getting outside made me feel like I could keep going.

Even now, years since the loss of my daughter, I have moments when I feel stuck. Stuck in my grief, or simply weighed down by the everyday stressors of life and distant from the things that really matter. The simplest remedy I’ve found for this is to find a moment to be outside. My favorite place to walk is the park where we planted a tree in her memory, but no matter where I am, being outside somehow makes me feel close to Eliza. I feel my pulse beating and know it’s the heartbeat she heard inside me.

Being among trees makes me feel small, but also makes me feel connected to my daughter. I still carry grief with me, but when I’m outside I find it easier to take a deep breath and believe that she feels my love. 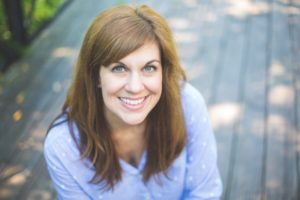 Brooke is the mom to four girls. Her first daughter, Eliza, was stillborn in December of 2010, and she and her husband are raising Eliza’s three little sisters. She is also a wife, a professor, a writer, and a microwaver of dinner. She lives in the St. Louis area and blogs at bythebrooke.blogspot.com.
Posted in Bereaved Parents, Honoring Your Child, Life After Loss, Mother's Grief