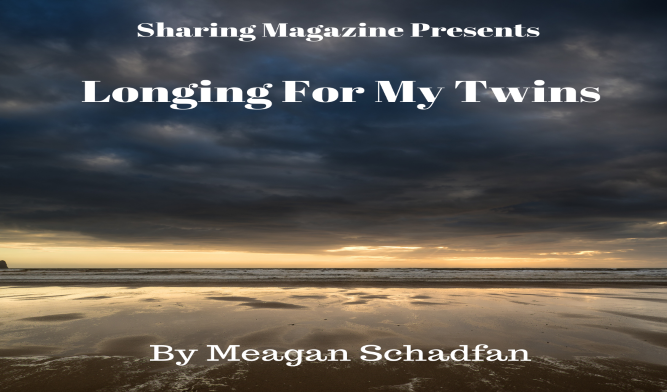 I found out I was pregnant with twins on a Tuesday. I went alone to the first appointment because my husband needed to pick up our son from daycare. Besides, everything was going to be ok, right?

In the ultrasound room, the tech told me that it was twins. I heard their hearts beating. I was scared, shocked, cautious, happy. My husband and I started making plans, seeing our new future with our precious little ones. By Thursday, we had built an entire life together as a family of five.

I was preparing to teach class when the bleeding started. The ultrasound at the emergency room revealed two heart beats. One was weaker than the other, but there were still two. Two babies. Twins. That was the first time my husband got to hear their heart beats, in the emergency room, with me covered in blood. There was nothing to do except wait.

Monday’s ultrasound showed one heartbeat. My angel baby was now referred to as tissue. “Vanishing twin,” they called her. But she didn’t go anywhere. She was still there, next to her twin, inside me.

Subsequent ultrasounds were painful and empty. The ultrasound pictures weren’t proudly displayed on the refrigerator; they were tucked away in dresser drawers. How was I supposed to be pregnant and grieve at the same time? I was afraid that feeling sad would take away from the joy of still being pregnant. I was angry that I didn’t understand why my baby had died, but I told myself that I needed to try harder to be excited about still being pregnant.

Then I entered my second trimester. Maybe the second miscarriage wasn’t going to happen after all. I allowed myself to feel the slightest bit of excitement for our family of four.

At sixteen weeks, it was time to learn the gender. I was going to my appointment alone because of COVID restrictions. There had been no bleeding, no pain, so surely that meant my baby was fine, right? I asked the ultrasound tech to please write the gender in an envelope so that my husband and I could find out at the same time together. She happily agreed.

Then the ultrasound began. The tech kept changing the angle of the probe, zooming in, clicking, zooming out, trying different settings to get the right angle. Finally, she turned to me and didn’t need to say anything to convey what had happened. She held me while I screamed. My baby didn’t have a heartbeat.

What did I do to deserve such a painful ending to this pregnancy? Was I not happy enough? Should I have asked different questions at my check-ups? Why didn’t the doctors see this coming? The answers to my questions didn’t matter, but that didn’t stop them from coming.

I was not ok. I drank. I phoned it in at work. I cried. I was not a mom, wife, sister, or daughter. I was a blurry, shadowed version of myself.

It took many months of therapy, many walks outside with my husband and son, and support from my family and friends to regain focus. And yet, I am not who I was before. From the moment I heard their hearts beating, my babies became a part of me.

I am still angry. Pregnancy seems easy for some people; why wasn’t it for me? As the two-year anniversary of the loss of my twin’s approaches, I find myself feeling sad, guilty, longing. I have learned that missing my babies doesn’t mean that I don’t love my son and his little brother. It has taken work to accept all of my feelings. I am learning how to make space for our babies, James, and Annie, and to honor them. The pain isn’t always raw, but it’s always there. It will always be there, right next to the love that I have for my children, each and every one of them.

Meagan lives with her husband and two sons in San Antonio, TX, where she works as a mathematics instructor at a community college. After the birth of her first son, she became pregnant with twins, which she lost at six and sixteen weeks. Pregnancy and miscarriage were very isolating and difficult for her during COVID. She was misdiagnosed with a uterine anomaly, which may have contributed to her miscarriages. She had several health episodes in the process of correcting the anomaly but was able to eventually give birth to another healthy baby. She has learned to be an advocate for her health and hopes that all women find strength to ask questions for themselves, during pregnancy or otherwise.